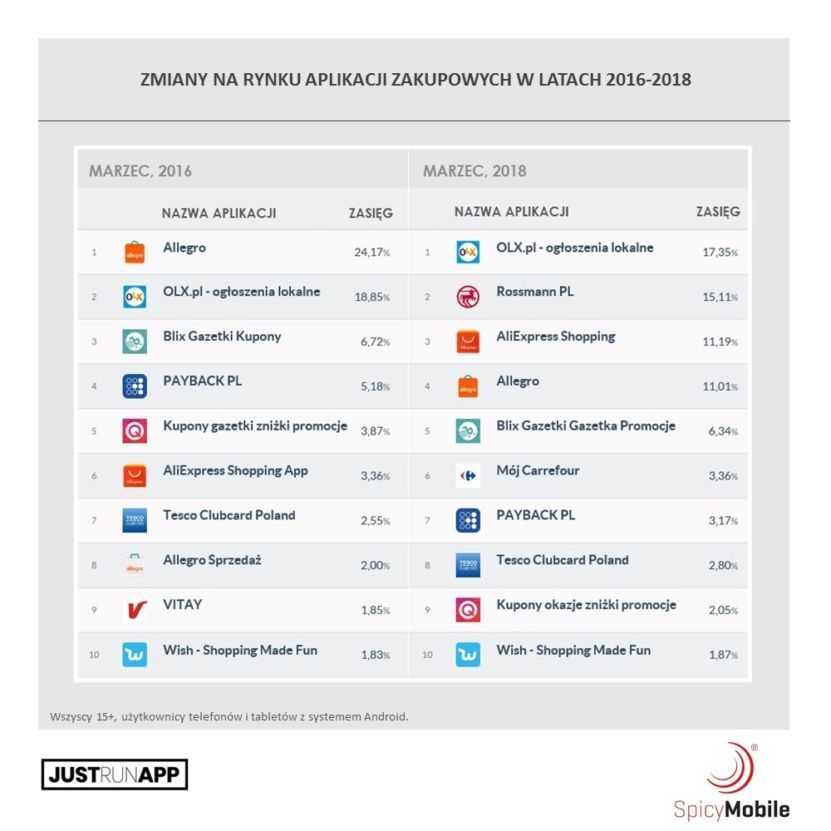 Shopping apps fight for the customer

Almost every second user has at least one shopping application installed on their phone or tablet. On the other hand, as the Just Run App and Spicy Mobile analyses show, publishers investing in m-commerce have to fight hard for customers. Most mobile apps lose up to 80% of acquired traffic in the first few monthsów.

According to Forrester research, 63% of userów found an app by finding it in the app store. Meanwhile, in Google Play alone, in the category „Purchases” we can find a total of 98 thousand shopping apps – are in the midst ofóThey are using loyalty programs, promotional newsletters, coupon apps or typical sales apps. It’s even harder for publishers to reach customersóin those using Apple’s mobile devices. By 2016. there was no separate category in the App Store „Shopping”, It now holds nearly 29,000 apps, and many of them are still in other places in the store.

Globally, the number of shopping apps is not dizzying – They account for approx. 3% ogóarc of apps available worldwide on Google Play and 1.33% of apps on App Store. However, when we look at the number of downloads, we can see how difficult it is for publishers to establish themselves in the m-commerce market. Our analysis shows that only 4% of shopping apps on Google Play have more than 50,000 downloads. Given that these types of solutions are created by companies with a specific goal in mind – support sales, growth from investment can be very difficult to achieve for many.

The market is highly competitive and dominated by international retailer apps and large online stores. Amongód them the most numerous group is the clothing industry, food and drugstores. It is difficult for new players to come up with a sales app. I estimate the average monthly installation potential in the Polish market at approx. 12 thousand downloads. Of course, in the case of a recognizable commercial brand it can be much, much higher.

About the scale of difficulties in app promotion – and thus attracting mobile consumers – is further evidenced by the fact that the average user installs only a few apps per month on their smartphone or tablet. At the same time, it removes some of the apps already installed. Most applications lose 70-80% of their usersóThe number of users acquired thanks to an advertising campaign within 60 days from the day of installation. This is related to the mismatch between the application and consumer needsóIt is worth mentioning that just two years ago the market was dominated by twoów – The results of Spicy Mobile and Just Run App are not only focused on getting any traffic, but also on attracting valuable usersów.

There is no shortage of spectacular successes on the domestic m-commerce marketóin, whichóThe results show how much there is to win. Last year, on the example of the Rossmann drugstore application, it turned out that it is possible to introduce an application with a niche reach to the top ten mobile applications in Poland within just a few months. RóThe popularity of mobile shopping apps is also growingóIn a short period of time, the number of downloads of the application in the Auchan chain, approx. 50 thousand downloads in two months, shows that consumers are interested in such products, and publishers need to invest in the attractiveness of the app and its regular promotion.

Spicy Mobile and Just Run App results show that the popularity of shopping apps is growing month by month. In March this year. 49% of users already use themóIn the first half of 2017, the number of mobile devices equipped with the Android operating system (41% in December 2017).). The monthly number of shopping app calls per user is also growing – from 56 in January to 85 in March 2018., which means an increase by approx. 50% in just three months.

The most popular apps include: OLX.pl, Rossmann, AliExpress Shopping App and Allegro. It is worth mentioning that only two years ago the market was dominated by twoóplayers – Allegro and OLX.pl. A year ago to this twoóThe app of a Chinese online commerce giant has been added to the ranking – AliExpress. Today, the market is more fragmented. In the leadóIn the top of the ranking, with a reach of over 10%, there are already four applications. There was also a significant reshuffle connected with the emergence of new players.

Further growth in the popularity of shopping applications will be influenced by investments made by large retail chains, changing attitude towards mobile customers, as well as facilitation of mobile payments. Applications – beyond the presentation of the current promotional offer – will increasingly offer „added value”, available only to their usersów. These may be loyalty programs, gamification solutions or the availability of selected productsóin exclusively from the application level. Rówe are about to witness another revolution – the permeation of the online and offline spheres. In the stores of the future the application will help us make a purchaseóquickly and without unnecessary difficulties. Choosing a recipe, we automatically add all the necessary ingredients to the shopping listóThe fact that the average user of the „scan&go” we can avoid the queue at the checkout.

We are transferring more and more functions from the so called “mobile apps” to mobile devices. large internet. However, publishers must remember that the mobile channel is not a copy. The app market is much more competitive, and users are selecting the apps they install. In addition to the attractiveness of the application, the success consists of promotional activities: the ability to attract high-quality traffic and gaining a high position in the ranking of the application store.

Michał Pietruszka, heads the Just Run App team, specializing in the development and promotion of m-commerce applications at Spicy Mobile